A commemorative floral tribute which marks 100 years since the beginning of World War One has received a coveted ‘Highly Commended for Excellence’ award from North West in Bloom.

The eye catching display in Broadfield Park of the classic poppy and a simple ‘1914 – 2014 Centenary’ message created a highly visible landmark to all traffic travelling along Manchester Road.

Councillor Alan McCarthy, Lead Member for Armed Forces, said: “We were proud to be able to commemorate the centenary of World War One with this flower bed prominently displayed to all visitors to Rochdale. It has served as a poignant reminder and helped bring a fantastic turnout to remembrance services across the borough.”

Measuring 12m by 5m, the flower bed was installed in July following a week of activity for Armed Forces Day. Sadly, the recent cold weather meant that the flowers could not survive through until Remembrance Sunday but the huge amount of positive feedback has prompted Rochdale Borough Council to look at options to install another flower bed next year.

The award is just one of many given out across the borough and Councillor Jacqui Beswick, Cabinet Member for Environment and Housing, said she was pleased that the council was able to support the community groups.

Councillor Beswick said “I was really pleased that by making sure our parks and open spaces look their best and by commissioning one off projects like this we were able to support the submissions from the Rochdale, Heywood and Pennines in Bloom community groups. The whole borough looked fantastic so thank you to everybody involved.”

Britain in Bloom is one of the longest running and well known environmental competitions in the United Kingdom. North West in Bloom is the voluntary regional organisation that runs the competition in Lancashire, Cheshire, Greater Manchester and Merseyside. This year marks the 50th anniversary of both.

The aim of the competition is to encourage the improvement of our surroundings through the imaginative use of trees, shrubs, flowers and landscaping. It also aims to achieve a litter free and sustainable environment.

​A unique piece of innovative artwork based on the unknown soldier on top of the Rochdale Cenotaph has been unveiled. 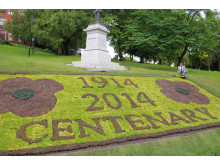 Councillor Sultan Ali meets the team which has installed the flower bed.