This month’s Rugby League World Cup 2013 game will be a very proud day for Rochdale resident Voate Drui. The 81 year old was one of the Fijians originally recruited to play for Rochdale Hornets, and arrived in a blaze of national publicity back in 1962.  After playing for the town for a decade he’ll be back at Spotland Stadium for the game on 28 October, the latest chapter in a remarkable story that started over fifty years ago.

Rochdale’s well documented links with the South Pacific date back to the early 1960s when the town’s Rugby League team took the innovative step of recruiting Fijian players.  Arthur Walker, the Hornets chairman saw a Fijian Rugby League game whilst in Australia.  He was immediately impressed by the size and speed of the players and was determined to bring them to Rochdale.

Fijian rugby stars Orisi Dawai and Joe Levula arrived 1961, with Voate Driu in 1962, and thousands turned out to watch them play, as Rochdalians fell in love with the Fijians.

Voate, who had played for his national side for two years before making the trip, said it was an opportunity of a lifetime he was determined to take:

“I can remember being so excited, we all were.  I enjoyed living in Rochdale right away, we all got a wonderful welcome, everyone was so friendly to us and we settled in quickly.  I have some wonderful memories.”

He was provided with accommodation in a cottage on Milnrow Road in Rochdale along with two other players.  As well as playing prop forward for the Hornets, he worked at mail order firm John Noble where he met his wife Dorothy. The couple married in Rochdale in 1964, and still both live in the town.  He enjoyed a successful playing career playing for the Hornets and says he loved every minute of it.  They went on to have two children, and after retiring from the Hornets, Voate continued to work, with spells at Bright’s Mill and later as a taxi driver.

Rochdale boasts the biggest UK Fijian community outside London, now in its fourth generation, and whilst Voate doesn’t get to as many games as he’d like these days, he’s still an avid supporter of the Hornets and will be proud to be at this month’s world cup clash:

“It is fantastic that the Rugby League World Cup is coming to Rochdale and Fiji are playing here.  Ireland are also one of the best sides and there is a real buzz in town about this game.”

After 50 years living in Rochdale, he says he couldn’t be happier:

“Coming to Rochdale and playing for the Hornets was the best thing I ever did. Meeting my wife here and having the children … it has all been wonderful.  I will never forget the welcome we received … I love the town, the community spirit we have and I am so proud.”

Voate still keeps in regular contact with friends and family, some who are still living in Fiji and are coming over to watch the game.  Many will be making the trip across the globe to watch their national team play, and thousands more will be watching on television as the game is beamed to millions across the world.

Fiji has been designated by tournament organisers as the adopted nation of Rochdale for the duration of the tournament, and to celebrate The Flying Horse Hotel will be serving a traditional Fijian menu on the day of the game in addition to some Irish specialities.  Nearby Mayfield Rugby Club are staging a Fiji Day celebration the day before the game too.

Tickets for the Rochdale game starting at £10 (£5 concessions) are available to purchase online at www.rlwc2013.com or by phoning 0844 847 2013. Tickets for all games in the tournament - including Rochdale’s are also available in person from Spotland Stadium box office. 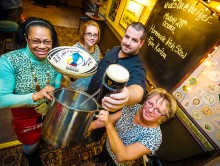 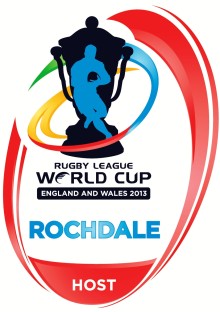