Rochdale Town Hall is being host to the Rochdale Music Service Christmas Concert on Friday 20 December, an event not to be missed by music lovers of all types.

Bands and choirs will be lighting up the Town Hall from 7 until 9.30pm with performances from a wide variety of outstanding ensembles from the Music Service.

Councillor Donna Martin, Rochdale Borough Councils Cabinet Member for children, schools and families said: “This is a great occasion to show the outstanding musical talent which we have in the borough. The work done by Rochdale Music Service should be celebrated and this is a fantastic opportunity for people to go and enjoy the music”.

Groups which are going to be attending include: the Youth Wind Band, the Youth Brass Band and the Youth Big Band, each of which have a national reputation for high standards.

There is definitely something for everyone at the concert with some of the newer ensembles performing such as the ‘Rochdale Pop Choir’ and the ‘Rochdale Children’s Choir’.

Christmas carols are also on the bill which will be performed by the Town Hall’s magnificent Binns Organ, which is now in its centenary year.
The event is bound to be a huge success following how well attended the 20th Annual Christmas Cracker at the Gracie Fields Theatre on Sunday 1 December went.

Over 500 school children from primary schools from around the borough shared the stage with bands and choirs from the Music Service.

The hugely popular event was presented over two concerts to massive audiences and in true Christmas Cracker fashion, each concert ended with an on stage snowball fight!

“I would like to congratulate once again everyone that contributed to this year’s event. I am extremely grateful to the small army of tireless volunteers that help out in hundreds of different ways in order to contribute to the success of these concerts. It was fantastic to see so many people being able to share in this joyous day of music making!”

Ticket prices for the Rochdale Music Service Concert are as follows: £5 for an adult £2 for a child £13 for a family ticket (2 adults and 2 children).

Tickets are available for the concert from the Music Centre on 01706 926 750, Town Hall Reception and Touchstones.

Join in with a special carol service on Monday 23 December in the children’s area at Rochdale Central Library where carols and book readings will be on offer. 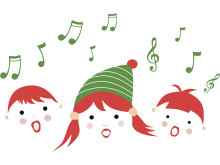