Councillors, veterans and members of the public gathered to pay respect to a true hero as a street in Heywood was renamed in commemoration of Private Anthony Palmer, a soldier in the Crimean War and Victoria Cross recipient, who is buried in Heywood Cemetery.

A heritage sign was unveiled on the former Wood Street, outside Heywood Library, at 1.30pm on Sunday August 24, to mark the official renaming of the street to ‘Private Anthony Palmer VC Parade’.

Among the guests was Private Anthony Palmer’s only living relative, his great-great-great grandson Ronnie Cooper, who had made the journey from Spalding, Lincolnshire.

Other activities, jointly organised by Rochdale Borough Council and the Lancashire Veterans Association, included the ‘Private Anthony Palmer VC’ parade, during which veterans marched from The Bay Horse pub on Torrington Street to Heywood Library. Music will be provided by the Regimental Band and Corps of Drums of the Grenadier Guards.

Councillor Alan McCarthy, Lead Member for the Armed Forces, said: “Private Palmer’s story is one of gallantry and selflessness, he is buried in Heywood and, as such, we have an obligation to preserve his memory and to recognise his incredible heroism.”

Ronnie Cooper said: “It’s been a brilliant day, I’m extremely proud. When someone got in touch to let me know that the council were looking to trace Private Palmer’s relatives, I was more than happy to get involved.

“Naming streets after people who have won things like the Victoria Cross is a fantastic way of keeping their memory alive.”

Private Palmer was born on the 10 March 1819 in Brereton Green, Cheshire. He joined the British Army and served with the 3rd Battalion, Grenadier Guards during the Crimean War (1854-1856).

He is buried at Heywood Cemetery, in a family plot with father James and mother Mary Rachel. The citation on his gravestone reads ‘An upright, valorous, god-fearing hero much beloved’.

Following the War, he was presented with the Victoria Cross, the highest military honour, by Queen Victoria at Hyde Park in London in June, 1857.

A digest of his VC citation reads:

“During the Battle of Inkerman, Crimea, on 5th November 1854, Brevet Major Sir Charles Russell offered to dislodge a body of Russian soldiers from the Sandbag battery if anyone would volunteer to go with him. Private Anthony Palmer volunteered. The attack succeeded. Private Palmer was present
when the charge was made in defence of the Colours. Sir Charles Russell also witnessed Private Palmer make a single charge against the enemy. He undoubtedly saved Sir Charles' life when he shot an assailant who was about to bayonet him.”

Private Palmer is also believed to be one of only 13 recipients of the Bentinck Medal for Gallantry. First presented by Major-General Sir Henry Bentinck, KCB in 1855, the medal recognised Guardsmen who had performed outstanding service, at a time when insufficient official awards for gallantry
were available.

After leaving the army in 1863 he rose to become the Head Constable of The Millwall Dock Company. He died on 12 December 1892 at the age of 73, in Crumpsall Hospital, Manchester.

The unveiling of ‘Private Anthony Palmer VC Parade’ follows that of ‘LCpl Joel Halliwell VC Way’ in Middleton and ‘L Cpl Stephen Shaw MC Way’ in Heywood, in recognising servicemen associated with the borough, who have received awards for their gallantry.

The street renaming is one of a host of events across the borough this year commemorating the sacrifice of British service personnel. To find out more visit www.rochdale.gov.uk/armedforces

Rochdale was one of the first councils in the country to sign the Armed Forces Community
Covenant, aimed at encouraging local communities to support services that promote and encourage activities that help integrate Armed Forces personnel back into civilian life. 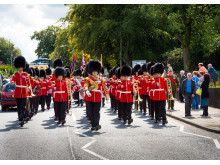 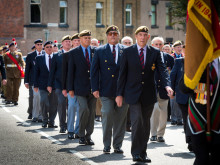 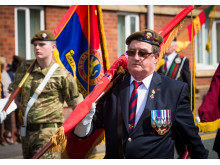 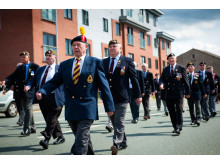 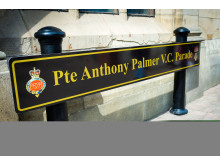 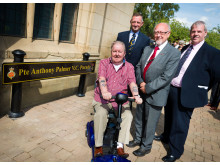