Children from across Rochdale borough are being given the opportunity to discover what life was like for First World War soldiers who set up the Ealees camp at Hollingworth Lake in 1914.

As part of Rochdale Borough Council’s Gone but not Forgotten project, social enterprise NatureEd is providing a series of WW1 re-enactment workshops funded by Heritage Lottery and working in partnership with Link4Life and Rochdale’s Countryside Service.

Among those taking part have been 20 young people and four adults from Rochdale Home School Educators Network. They built shelters, cooked trench stew over a camp fire and wrote postcards imagining they were soldiers writing home. Messages included: “To Dad, We all built a den in teams and we made soup and ate it – even me with veg in it.”

For families and friends, there is a public shelter and cooking event during October half term on Wednesday 29 October 11am to 2.30pm. Places are limited so booking is essential on 01706 373421

Councillor Alan McCarthy, Lead Member for the Armed Forces at Rochdale Borough Council, said: “Feedback from the parents was very positive. The event really inspired the children’s interest in the local history of World War One and helped them to connect with the lives of the soldiers in the 1914 Camp in a very real way.”

During the late summer of 1914, the Ealees Valley at Hollingworth Lake was transformed into a scene of military activities as the Manchester Territorial Regiments set up a training camp there.

The valley became a sea of tents, crowds of local people came to view the spectacle and visit the men.

Following the outbreak of war in the summer of 1914 the Old Pals battalions were formed and incorporated into the wider Manchester Regiment. They set up camp in the Ealees Valley, with Hollingworth Lake briefly becoming the scene of fervent military activity. The Regiment would go on to fight with great distinction in the French and Middle-Eastern campaigns.

In conjunction with Link4Life, Rochdale Borough Council received £9,800 in funding from English Heritage for the Gone Forgotten project, which will encourage and help the local community to commemorate and explore the impact of the First World War.

The children’s camps are some of a host of events across the borough this year commemorating the sacrifice of British service personnel. To find out more visit www.rochdale.gov.uk/armedforces 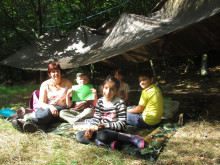 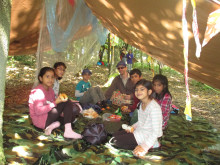 Team Marine are Ismail, A... 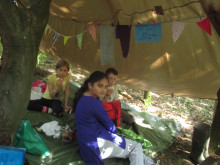