A unique piece of innovative artwork based on the unknown soldier on top of the Rochdale Cenotaph has been unveiled.

The Mayor Councillor Carol Wardle officially launched the artwork in front of a packed audience at Rochdale Town Hall as part of the boroughs World War One Centenary commemorations.

‘The Cenotaph: A 21st Century Viewpoint’ has been produced by local artist John Cooke.

“The British solider on top of the cenotaph cannot be clearly seen but this project has made it possible.”

“We are pleased to support this project which has provided a very thought provoking angle on a significant and important local landmark. It has had a fantastic reception and already proved a real talking point. It will certainly stimulate discussion and debate as the Cenotaph is seen from a new perspective.”

Commissioned by Rochdale Township and produced in association with ‘All Across The Arts,’ John used an aerial photograph as the base of his work which he then digitally manipulated in his studio and further treated before it was laid over an art work. The completed 6ft x 4ft wide piece, complimented by two more of John’s original canvases, forms a portable arts installation available to community groups and schools in the borough for classroom art workshops, creative writing sessions or drama groups with a World War theme.

Rochdale Cenotaph, unveiled in 1922 was designed by Sir Edwin Lutyens, who was also responsible for the Cenotaph in London. It is 32 feet high and topped with a sarcophagus bearing the figure of the unknown soldier.

The new artwork is now on display in Rochdale Central Library until the end of the year.

​A commemorative floral tribute which marks 100 years since the beginning of World War One has received a coveted ‘Highly Commended for Excellence’ award from North West in Bloom. 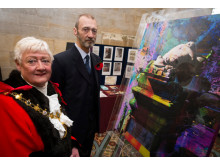 A DIFFERENT POINT OF VIEW

The Mayor Councillor Carol Wardle with artist John Cooke and his innovative artwork. 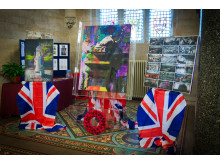 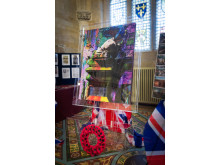 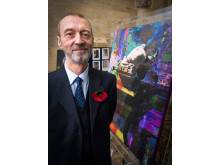 John Cooke at the launch of ‘The Cenotaph: A 21st Century Viewpoint.’ 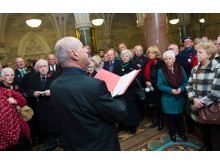 Norman Warwick from local arts organisation All Across the Arts introduced the project at Rochdale Town Hall, reading a new poem by Simon... 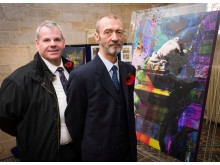