The day the Tour de France came to the borough has been immortalised in print and on canvas by Rochdale artist John Cooke.

John was commissioned by the council to commemorate the famous day in July, when a usually quiet corner of Littleborough was transformed into a major visitor attraction. A crowd in excess of 20,000 had lined the route, so John said picking the ideal spot to take his photos was crucial:

“Everyone wanted a good view, but I got up there very early and selected what I thought was the perfect spot, on the corner of Turvin Road … it enabled me to capture all the drama and excitement as the cyclists passed.  It was an amazing atmosphere, with such anticipation, so by the time the cyclists arrived it was incredible.  I just had to focus myself on getting a great photo!”

John then returned to his home studio to work his magic, adding the vivid digital effects that make his work so distinctive.

In the coming weeks John and his colleagues will be visiting six schools across the borough, hosting classroom art workshops with a cycling theme, using prints of the picture to stimulate budding artists and raise awareness of the links between sport, exercise and art.

The original picture was presented to Council Leader Richard Farnell and is now on public display on the Ground Floor of Number One Riverside, Smith Street in Rochdale.

Council Leader Richard Farnell said he was very impressed with the final result:

“The Tour de France’s visit to Littleborough was a fantastic occasion and John has really captured the excitement, drama and spirit of the historic day in this unique picture.”

Other prints of the Tour de France are available from Number Ten Gallery, Bailllie Street in Rochdale and ‘Fresh from the Studio’ gallery in Littleborough.

For more information on this story please contact Mark Roberts on 01706 924761 or email mark.roberts@rochdale.gov.uk 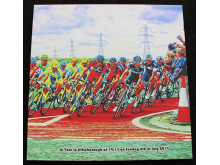 DISTINCTIVE: John captured the excitement of the day, adding vivid digital effects to create a distinctive piece of modern art, now on di... 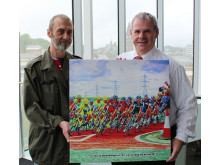 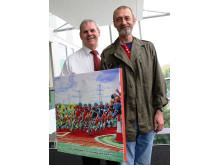