Rochdale’s residents could soon be toasting the success of Recycle Week with their very own piece of the old municipal office, known as ‘the black box’.

The building, which started to come down earlier this month, is playing its part for Recycling Week this week, with over 90 per cent of its materials set to be used again.

The building may be gone by the end of October this year, but Rochdale Council’s ambitious recycling pledge means that it will continue to play its part in the borough for years to come.

Cupboards, chairs and tables have already been donated to a number of key local organisations, with schools including Redwood, Shawclough and St John’s taking some pieces alongside Rochdale Sea Cadets and the Pennine Acute Hospitals Trust.

Some of the recyclable material will be sold on, generating income for the project and reducing the cost of sending rubbish to landfill.

Other materials will be used on regeneration projects around Rochdale, with much of the concrete and stone being used to fill in the subway under the old bus station and the swimming pool in the Broadwater Centre, saving the use of new quarried material.

The rest will be sent to a local recycling plant. From here, there’s no limit to what the ‘Black Box’ can be turned into. For example, the glass windows could be turned into beer glasses or champagne flutes, while the metal could be used for drinks cans or jewellery.

Councillor Peter Williams, Deputy Leader of Rochdale Borough Council, said: “We’re really pleased to be able to announce this at the start of Recycle Week and I hope it encourages everybody to think about what they throw away. Recycling such a high percentage of the ‘Black Box’ is fantastic news for both the environment and for the borough’s taxpayers.”

Rachel Gray from Recycle Now said, “We have been running Recycle Week for over 10 years and it has been a great success in promoting recycling both in the home and away. It’s great to hear that Rochdale Council are recycling so much of the ‘Black Box’ and we hope that residents across Rochdale make the most of Recycle Week, not just at home but in their everyday life.”

For more information on Recycle Week and how to take part visit www.recyclenow.com and follow #recycleweek.

Rochdale Borough Council and the RIBA (the Royal Institute of British Architects) have named Manchester-based BDP as the winners of the design competition to transform the town centre and complement plans to reopen the River Roch. 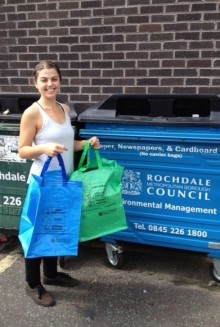 The 'Black Box' will soon join the rubble of the old bus station and car park.

The once busy thoroughfare to the town centre.