Rochdale resident Sana Khan from Castleton will join over 300 elected members of Youth Parliament at a national debate in the House of Commons on Friday 15 November 2013, to decide the UK Youth Parliament’s priority campaigns for 2014.

The debate, chaired by the Speaker of the House of Commons the Rt. Hon John Bercow MP and broadcast live on BBC Parliament, will focus on the top five issues chosen by more than 478,000 young people in the UK Youth Parliament’s Make Your Mark ballot earlier this year. At the end of the five debates, Members of Youth Parliament will vote to decide which two issues will become their national campaigns for 2014.

The five issues up for debate are:

This debate marks the start of Parliament Week – an annual national awareness week which aims to build greater understanding and engagement with parliamentary democracy in the UK. It is the fifth time that the UK Youth Parliament has debated in the House of Commons Chamber and they are the only group, other than MPs, allowed to do so.

Each debate topic will be introduced with speeches from regionally elected Members of Youth Parliament, who will put forward arguments for and against the issue becoming their campaign, before opening up to the floor. Following the five debates, each Member of Youth Parliament in the Chamber will vote for their top two issues. Ballot papers will be collected and counted by House of Commons staff, and the result will be announced by the Speaker of the House of Commons at the end of the event.

Sana says: “I am really looking forward to debating and voting on the issues identified by young people as important to them. I have been talking to young people to get their opinions about these issues so that I can make sure I am speaking on behalf of all the young people of Rochdale.” 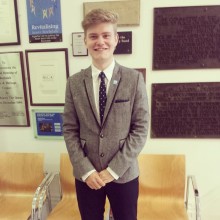 Rochdale’s Youth Cabinet Member Christopher Marland has been elected to represent the views of young people across the UK.

Rochdale resident Sana Khan from Castleton will join over 300 elected members of Youth Parliament at a national debate in the House of Co...