A woman whose family created much of Rochdale’s heritage has given a big thumbs up to the proposal to reopen the River Roch.

Margaret Royds is part of the fifth generation of the famous Royds family, who built a number of sites in Rochdale, including Falinge Park, St Edmund’s Church and the old Royd’s bank, which is now part of the RBS building.

Although she lives in Australia, Margaret, who was married to James Royds until his death in 2007, visits Rochdale as often as she can and is impressed with the remarkable transformation of the town her family helped to build.

She said: “I’m so delighted by the river reopening project.  Rochdale has such a fantastic heritage and this is a great way to exploit it. It’s something positive and lasting and the potential for tourism is enormous. The scenery around Rochdale is lovely and there is so much open space.”

As well as regularly visiting the town, Margaret (79) who lives on a farm in Braidwood, New South Wales, ensures that Rochdale’s history is known about worldwide by giving tours of her home which features portraits of her ancestors and their role in Rochdale’s history.

She said: “I’m pleased that his river reopening project focuses on community engagement. If you educate young people about the great history of the place where they live, they learn to take pride in their town.”

As well as building on the town’s unrivalled heritage offer and transforming the centre as part of the wider regeneration plans, the river reopening will have environmental benefits. These include reducing the risk of flooding, introducing new habitats and wildlilfe and exposing the river to natural light which will help to improve the water quality.

The proposal to reopen the River Roch and reveal medieval bridges in the heart of the town centre is a joint project between Rochdale Borough Council, The Environment Agency and the Heritage Lottery Fund. The second stage bid for Heritage Lottery Fund money to help finance the project will be submitted in February 2014 with the results expected in the summer.

Councillor Colin Lambert, Leader of Rochdale Borough Council, said: “The reopening of the River Roch will totally transform Rochdale town centre and make it quite unique in the area. We’re thrilled to have Margaret’s support on this project and are glad that the word on how beautiful Rochdale town centre is has spread as far as the other side of the world.”

Anyone who would like to get involved with a programme of activities to help mark and steer the project in a fun and creative way can get in touch by emailing  revealingtheroch@rochdale.gov.uk or calling 01706 924837. 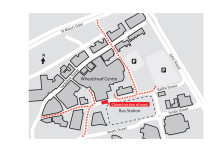 A section of Baillie Street outside the Wheatsheaf shopping centre is set to close to traffic at the end of this month as part of a scheme to make the town centre more pedestrian friendly and reduce town centre congestion.

Rochdale visitors on a trip back in time

Have your say on how to tackle flood risk

Rochdale residents are being invited to have a say on how local flood risks are managed in the borough. From Monday 28 October to Friday 29 November, a five week public consultation will give local people the opportunity to help shape polices about flood risks in Rochdale.