Hartley Thomas Wright Solicitors, CRB Problems, Rochdale Online, Rochdale Boroughwide Housing, accountants TBD Associates, estate agent Martin & Co and the publishers of Rochdale Style Magazine have all signed the covenant which recognises their support of the armed forces community and their recognition of the value of serving personnel, veterans and military families.

Senior representatives from all the businesses signed the covenant at Rochdale Town Hall, in the presence of Councillor Alan McCarthy, Lead Member for the Armed Forces at Rochdale Borough Council, Acting Chief Executive Linda Fisher and Lt Cdr Lee Paddock from the Ministry of Defence.

“I am very pleased to see yet more local firms showing their commitment by signing the Corporate Covenant, making nine in total already. The military have all made great sacrifices for their country and it is right that we do all that we can to embrace them into our community. I know they have always aimed to be supportive of the armed forces but this reinforces the work they do.

"These businesses recognise the important contribution armed forces make towards our country and our community and it is important to formally recognise their support which is what we have done today.”

The principles of the covenant state that the companies will all endeavor in their business dealings to uphold the key principles of the Armed Forces Covenant, which include promoting themselves as an armed forces friendly organisation and ensuring the armed forces community are not disadvantaged. In some cases, such as the sick, injured or bereaved, this means giving special consideration to allow them access to public or commercial services that civilians receive. In addition the covenant aims to highlight the sacrifices made by members of the armed forces; promote greater understanding of the issues facing them and help fully integrate former service men and women into the community. Details of the offers available to the Armed Forces from these companies is available at www.rochdale.gov.uk/armedforces

The council signed the Armed Forces Community Covenant in 2012, aimed at encouraging communities to support services that promote and encourage activities that help integrate armed forces personnel back into civilian life. RRG Toyota, the car dealer on Edinburgh Way, was the first local firm to sign it in January this year, closely followed by Commercial Contract Engineers.

Current or ex Armed Forces personnel can register for help or get more information by visiting www.rochdale.gov.uk/armedforces . If they encounter difficulties when accessing services from the council or its partners email armedforces@rochdale.gov.uk or call the council on 01706 926989. 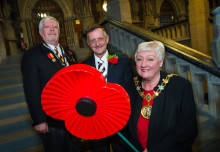