A young autistic man and published poet is using the power of the written word and libraries to help cope with his condition.

Adam Souter, 26, of Heywood, has been a member of Rochdale Borough Libraries since he was five years old and has now penned a poem to describe the powerful positive effect his ‘home away from home’ has had on him.

Through finding that solace and escape in books Adam has boosted his sociability, confidence and ability to navigate life with his condition and now, as a thank you to Rochdale Borough Libraries, has donated copies of his anthology, Eidetic Emotions, in the hope that others with autism may also gain hope through reading about his experiences and emotions. He also co-hosts ‘All Across the Arts’, a Crescent Community Radio show and even performs his work in local venues, including at last year’s inaugural Rochdale Literature and Ideas Festival at Rochdale Central Library.

Science fiction and fantasy fan Adam, who even as a child would easily read 12 books a week due to his photographic memory, said: “It was very difficult growing up as autism wasn’t as widely recognised as it is now. I was initially misdiagnosed as having ADHD because I became bored very easily and I didn’t have an easy ride at school as I was bullied.

“Writing is an outflow for my emotions as autistic people hold our feelings in and don’t know how to express ourselves. It’s still hard when I’m around a lot of people. I have managed to help myself over the years by developing a lot of self-control.

“The library has helped me so much and hopefully my book can now help other people. You are never alone and there’re always people who you can speak to.”

Adam was first encouraged to write by his family, especially his beloved grandmother who passed away in 2009. Adam has also been helped on his journey by Ray Stearn, Rochdale Borough Libraries’ Young Person's Library Worker, and Norman Warwick, of Just Poets, who Adam was referred to by a job centre worker three years ago after learning about Adam’s love for creative writing.

Mr Warwick said: “Adam has made such massive strides and is a calmer person than the one I first met. At first Adam found it very difficult as there were 25 people in a small room at Touchstones Creative Writing Group, but now he’s a regular member of the group who stands up to read.

“The fact Rochdale Borough Libraries is prepared to give Adam a platform is fantastic.”

Adam has just started working as a security guard and in the future hopes to pursue further education and even turn his hand to writing science fiction for children.

Eidetic Emotions can be found at Rochdale Borough Libraries, or is available to download for Kindle.

More of Adam’s poetry can be read at www.writerscafe.org/silfrstjrana 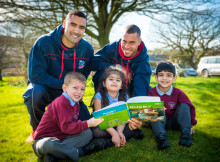 Players from the Rochdale Hornets Rugby League Football Club are encouraging children to scrum on down and become members of Rochdale Borough Libraries. 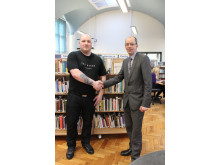 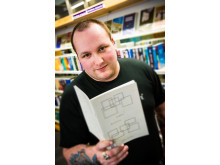 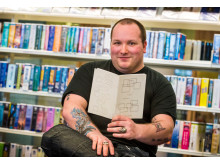