The birds of prey first began nesting in the clock tower of the Grade-I Listed building six years ago, after a nesting tray was installed by the Manchester Bird Recorder. Four chicks and two adult falcons mean the box is getting a little crowded so plans are being put in place to enlarge the box for next year.

Staff at the town hall have been keeping a close eye on the progress of the four young chicks, who all seem to be progressing well and will soon be ready for flight.

Assistant Cabinet Member for Community, Culture and Tourism, Councillor Janet Emsley said “Our town hall is a fantastic building which attracts visitors from all over the world. We’re really pleased to see such beautiful wildlife as these Peregrine Falcons nesting here again and it adds another string to the town hall’s bow.”

“We’d love you to share your photos of the Falcons with us on our Facebook page, www.facebook.com/rochdalecouncil”

Richard James from The Royal Society for the Protection of Birds (RSPB) said “It’s great to see the falcons nesting on the building. They have become a popular attraction in many towns and cities and we hope they continue to be successful”

Reaching speeds of up to 200mph during dives to catch prey, Peregrine Falcons are the fastest animals in the world. Although they are commonly found living and hunting in open countryside, they are increasingly being spotted in towns and cities where tall buildings provide plenty of nesting opportunities and pigeons to feed on.

As one of around 1,500 breeding pairs across the UK, these falcons delayed works as part of the town hall restoration when two chicks nested in the clock tower in 2012.

You can marvel at the wonderful architecture, immerse yourself in the building's history and even take a look at the Mayor's Parlour on a guided tour of the town hall. Tours take place on the last Friday of each month at 2.15pm and last about 2 hours. For more information and to take a virtual tour, visit www.rochdale.gov.uk/townhall 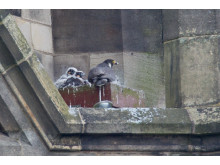