RRG Toyota has become the first organisation in Rochdale to sign the Armed Forces Corporate Covenant.

The signing of the covenant by the leading car dealer on Edinburgh Way, recognises their continuing support of the armed forces community and their recognition of the value of serving personnel, veterans and military families.

RRG Toyota’s General Manager Jared Griffin, signed the promise at their showroom which has provided sales and servicing on site for over twenty years. He said the company was proud to be pledging support to the armed forces by signing the Corporate Covenant:

“We have always supported the armed forces but this reinforces the work we do and will hopefully encourage other local organisations to sign up in future. Last year we took part in national Armed Forces Day, including staging a military exhibition here, but I felt there was more we could do.”

The principles of the covenant state that RRG Toyota will endeavour in their business dealings to uphold the key principles of the Armed Forces Covenant, which include promoting themselves as an armed forces friendly organisation and ensuring the armed forces community are not disadvantaged. In some cases, such as the sick, injured or bereaved, this means giving special consideration to allow them access to public or commercial services that civilians receive. In addition the covenant aims to highlight the sacrifices made by members of the armed forces; promote greater understanding of the issues facing them and help fully integrate former service men and women into the community.

RRG Toyota provide a free vehicle wash and vacuum service for all armed forces personnel and veterans, together with special car deals including two years free servicing on all vehicles. They have recently provided work experience to a former armed forces member and will guarantee an interview to those with a military background who meet the person specification for a host of jobs they are currently recruiting for. RRG Toyota will also be supporting British Legion events in 2014 and participating in Armed Forces Day this June added Jared:

“We have a lot of ideas, including what we are doing already. Supporting the armed forces in this way is something all the staff here are very enthusiastic about.”

Councillor Alan McCarthy, Lead Member for the Armed Forces at Rochdale Borough Council witnessed the signing and presented RRG Toyota with their certificate:

“RRG Toyota have already demonstrated their commitment to the armed forces and I am pleased they are building on this to become the first organisation in the borough to sign the Corporate Covenant. The military have all made great sacrifices for their country and it is right that we do all that we can to embrace them into our community.”

The council signed the Armed Forces Community Covenant in 2012, aimed at encouraging local communities to support services that promote and encourage activities that help integrate armed forces personnel back into civilian life.

Current or ex Armed Forces personnel can register for help or get more information by visiting www.rochdale.gov.uk/armedforces If they encounter difficulties when accessing services from the council or its partners email armedforces@rochdale.gov.uk or call the council on 01706 926989. 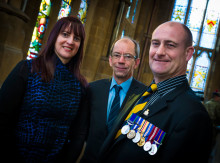 Former Corporal Mark Coulthard from Castleton is the first person to get a new job through Rochdale Borough Council’s Military Covenant Scheme. 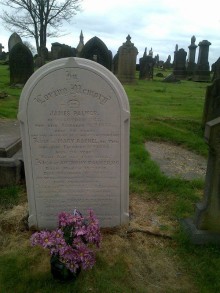