Rochdale police and trading standards officers have smashed a counterfeit operation following a tip off that top brands were being sold at knock down prices on Facebook.

The team set up surveillance following the tip, which led them to a storage unit in Castleton. Once there, they found hundreds of fake goods stamped with sought-after brand names including Hollister, Superdry, Adidas and Converse All Star.

Officers estimated the total value of the goods, which included Ugg Boots, Lacoste tracksuits and North Face hoodies, at around £15,000.

The Ugg boots, which retail at upwards of £100 per pair, were being sold for £35, while buyers could get their hands on an Adidas tracksuit with a recommended retail price £40 for just £25. Perfumes were advertised at just £15.

Among the shoddy quality goods which were destined to appear under trees this Christmas, were jumpers which had the brand logos simply screenprinted onto them.

A 24-year-old man from Turfhill has since been arrested on suspicion of offences under the Trade Marks Act 1994 and bailed until 3 December.

While on site the team also uncovered a haul of fireworks in a separate unit which they are currently investigating.

The council is now warning consumers looking for a cut price Christmas not to fall for the counterfeit con.

Councillor Jacqui Beswick, Cabinet Member for Regulatory Services at Rochdale Borough Council, said: “It’s easy to be tempted by cheap deals, particularly at expensive times of the year like Christmas, but if you buy counterfeit, you might find that your jumper has fallen apart before your tree comes down or that your new perfume has left you sporting a nasty rash at the New Year bash.

“People also need to remember that the proceeds of these operations also often fund organised crime. I doubt many could sleep soundly this Christmas knowing that.”

Anyone who suspects counterfeiting is advised to phone the Citizens Advice Consumer helpline on 08454 04 05 06.

Top tips on avoiding fakes when buying presents this year:

Council and police officers seized more than 20,000 illicit cigarettes and a large stash of male impotency drugs during a raid at a property in Langley. 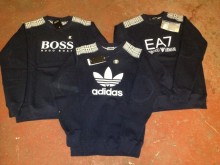 Hundreds of fake goods stamped with sought-after brand names including Hollister, Superdry, Adidas and Converse All Star have been seized...

Hundreds of fake goods stamped with sought-after brand names including Hollister, Superdry, Adidas and Converse All Star were seized by R...