Councillor Jacqui Beswick has issued a serious warning to dog owners who fail the clean up after their pooch after some have allowed their pets to foul among the graves at Heywood Cemetery.

Together with Rochdale Borough Council, Councillor Beswick is making a renewed effort to tackle and catch those responsible for dog fouling across the borough following a spate of instances in Heywood Cemetery, Hare Hill Park and Balderstone Park.

Councillor Beswick, Cabinet Member for Housing and Environment, said “On a recent visit to Heywood Cemetery, I noticed dogs were freely fouling at the bottom end of the cemetery. I have since heard that this has been happening on a regular basis and it is simply not acceptable.

“People visit the cemetery to grieve and to remember their loved ones – the last thing anybody would want at such a time like would be to step in dog faeces. Residents can be assured that we are working extremely hard to catch those responsible and will be using all legal powers at our disposal to prosecute them, including taking such cases to court”

Enforcement officers are patrolling the streets and parks of Rochdale, gathering information, providing advice and handing out bags to any owners who have run out. Fixed Penalty Notices will be handed out to anyone caught allowing their dogs to foul and not picking it up, or dropping litter.

Service Head Martin Taylor said “Owning a dog is a big responsibility, part of which is to ensure that you pick up and dispose of dog foul properly. Not only is it unpleasant to step in, dog faeces can be dangerous as it carries potentially lethal diseases and can cause blindness.

”To make the problem worse, people often walk their dogs in parks and on fields where children play. It only takes a split second for a child to wipe their eye and catch an infection which causes them to go blind. We are urging owners to always pick up after their dog.”

Officers are patrolling known hotspots early in the morning, during the day and in the evening and will issue fixed penalty notices of £50 for dog fouling offences and £75 for littering. This will be reduced to £50 if paid within 7 days but offenders who fail to pay will be prosecuted. Almost 100 Fixed Penalty Notices have been issued over the past year and there have been eight successful prosecutions.

Patrols take place in targeted areas with officers wearing high-visibility clothing and armed with information, stickers and leaflets. Officers are looking to work with local communities to build a strong defence and show the red card to dog fouling in their neighbourhoods.

Residents can report dog-fouling 24/7 via the online form at www.rochdale.gov.uk/dogpoo .

Makeover under way at Balderstone Park 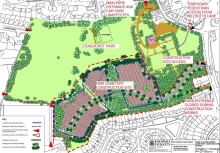 Work to Begin on New Cemetery

Rochdale Borough Council is set to begin work to create a cemetery in the southern part of Denehurst Park. 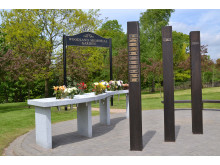 PEACEFUL HAVEN: Work to create a special area where the bereaved can remember their loved ones has been completed at Heywood Cemetery 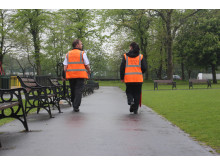 Out On The Beat 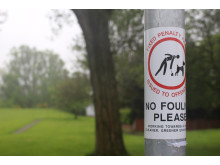 Signs have been put up across the borough reminding dog walkers that they face a fine for failing to pick up after their pooch.