Construction of a 250kW photovoltaic (PV) solar farm has started on around one acre of contaminated land behind Rochdale Leisure Centre, on Entwistle Road. The solar farm will operate for up to 25 years and will then be decommissioned or the panels will be replaced.

Work has also begun on adding the council-owned 100kw rooftop solar panels to Heywood Sports Village. The electricity generated from both the Rochdale and Heywood solar panels will be sold back to Link4Life to power the sports complexes.

The solar farms are being built by Southern Solar, whose managing director Howard Johns attended the turf cutting. The council has received technical support from Robin Dummet, of Novus Solar Development.

Mark Widdup, Director of Economy and Environment for Rochdale Borough Council, said: “We are leading the way as a ‘green’ authority and this solar farm will not only bring in revenue for the authority but help us become more energy self-sufficient in a time where fuel bills are on the rise.”

Mr Johns said: “We are very excited to be involved with such a forward thinking project and a proactive council.”

As part of the Greater Manchester Climate Change Strategy, Rochdale Borough Council has agreed to a 48 per cent CO2 emission cut by 2020. Rochdale Green Action Plan is the council’s overarching sustainability strategy.

A pilot turbine on the site of the former Hill Top School in Kirkholt, has been generating electricity since April and plans have been submitted for two more council-owned wind farms in Hopwood. 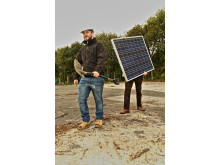 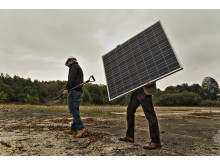