More than 2,000 people are on the mailing list at The Carers’ Resource in Oldham Road, with many attending there to get advice and support as well as meet other carers. But it is estimated that 21,000 more people in the borough may be eligible for their help.

Now members of The Carer’s Resource, who are carers themselves and who all look after a friend or loved one, will be manning the stall in the outpatients department each morning during the week and spreading the word.

Pauline Fardon from Shawclough looks after her son who has a mental health problem. She said: “Going to The Carers’ Resource makes me realise I’m not alone. Carers often don’t have the energy to seek help and don’t realise there’s lots of support out there, so that’s why we’re here.”

Cllr Jean Hornby, Cabinet Member for Adult Care at Rochdale Borough council, described the move as an example of people working together for the benefit of other people.

She said: “Health and social care are very closely linked as we are all trying to support people at their time of need. We’re really pleased that our colleagues in the Rochdale Infirmary have supported us in this venture as the types of people who will be coming into hospital with a loved one are exactly the people who could benefit from being part of The Carers’ Resource.”

The Carers’ Resource has also launched a special support group for the parents and carers of children with autism and asperger’s syndrome. Peter Halliwell, from ASGMA (Autistic Society Greater Manchester Area) and Wendy Atkinson from the National Autistic Society dropped into The Carers’ Resource to talk with carers about the unique challenges facing the carers of autistic children.

The group is planning to meet every two months at The Carers’ Resource at Newbold Building on Oldham Road.

Anyone who would like to find out more about the support group, or any other services The Carers’ Resource provides can contact them on 01706 925808.

Books Are Just The Tonic To Help Heal The Mind

Rochdale Borough Libraries is working together with GPs, health and social care professionals in an innovative scheme to help people with mental health problems. 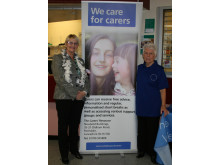 Carers prove that a dose ...